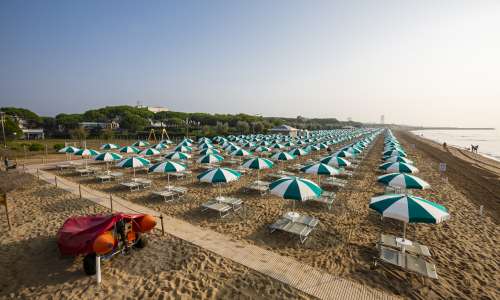 WHY BOOK ONLINE?
Because you can purchase at any time: You can look for and purchase your beach umbrella 24 hours a day, 7 days a week.
Because you can purchase at the last moment: You can purchase your beach umbrella at the last moment thanks to real-time availability.
Because it’s easy to find special offers: We offer a vast range of great value offers and you can clearly see the spaces available.
Guaranteed sun: Thanks to our webcam you can see the weather in real time and decide whether to purchase or not.
Because we offer all the help you need: If you have any questions you can telephone us or e-mail us (contact details below).
Because it’s so handy: You can check-in directly from home or from the office. Once your purchase is completed, you will receive a confirmation e-mail voucher with all the info on your chosen space. YOU DO NOT HAVE TO PRINT the confirmation voucher. Just go to your sunbed and collect the receipt, which will be printed at the cash desk, whenever you want.
Because you can choose your space early: Just click on your favourite space on the beach umbrella map and your request will be immediately confirmed, with the guarantee that everything will be ready on your arrival.
Because it’s extremely safe: Credit card payments are encrypted and guarantee complete client data protection.
Because you are making a difference to climate change: You can offset the CO2 emissions of your vehicle by reducing journeys to a minimum and avoid wasting paper by using your tablet or smartphone.
Because you can receive all the useful info: Info will be sent via e-mail to the address given on booking. You’ll find all the details and useful advice on how to reach us.
Any suggestions on how to improve our service? Just send us an e-mail – we’ll be happy to receive your suggestions!

From the website homepage select "PURCHASE" in the "Oro Beach" and "Green Beach" squares. A map of the beach concession will appear where you can easily check availability and choose the space and date you prefer. Once you have selected your space, select "PURCHASE" and then enter your:

and select "CONTINUE WITH PAYMENT". You will access the "Carta Si" page where you enter your credit card details. Credit card payments are encrypted and guarantee complete client data protection. At the end of your purchase you will be sent an e-mail containing a voucher to present when you arrive on the beach. YOU DO NOT HAVE TO PRINT THE VOUCHER.
Avoid the queues, get comfortable on your sunbed and collect the receipt that will be given to you by beach concession staff.

N.B.
Once the purchase procedure begins, you have 20 minutes to complete payment, after which the beach umbrellas will be released and can be booked once again. You can select a maximum of 4 spaces.

This procedure involves an ONLINE PURCHASE. At the moment refunds cannot be given if the beach space is not used.

SUNTANNED or YOUR MONEY BACK

This is a refund service for your beach space at the Oro Beach and Green Beach concession, under special conditions and at a cost of 1 Euro extra.
HOW TO USE THE SERVICE:
You can purchase the service during online purchase at www.jesolospiagge.it
After selecting the date and the beach concession, you can choose the "Suntanned or your money back" service.
Enter your personal info (name, surname, address, tax code and e-mail). Once the info has been entered you can type in your credit card details and when purchase is complete you will receive a voucher showing the date of use and the space booked.
On the day on which the service is to be used you will be entitled to A FULL REFUND if the conditions are satisfied.
REFUND CONDITIONS
In order to receive a refund, weather conditions must include rain of at least 3 mm between 11 am and 5 pm.
This will be verified by the ARPAV website, with rainfall bulletins for Cavallino.
Link HERE.
If the conditions above are met, the client who has not used their beach space will be entitled to a full refund of the amount paid by credit card.
A credit note for the full amount to be paid will be provided only if an e-mail is sent to amministrazione@jesoloturismo.it by the day after the booking date.
Jesolo Turismo S.p.A. is not responsible for the refund methods via payment circuits of clients’ credit cards.

From this year you can book your car parking space in combination with your sun umbrella online:
PURCHASE PROCEDURE:
1. After selecting the space, tick the car parking space and proceed to payment.
2. You will receive confirmation by email including a QR CODE allowing access to the Oro Beach car park.
(You can print the confirmation or put your smartphone next to the reader).
The online booking for the Oro Beach car park is guaranteed until midnight the day before use (e.g. midnight on Saturday for Sunday).
WARNING: the purchase of the parking space provides for a single use but not the exit and multiple entry throughout the day. Once you exit, you lose its validity.
WARNING: do not take a ticket from the machine near the entrance bar but put your QR CODE next to the reader.

REGULATIONS GOVERNING '' BATHING AT THE BEACH AREA MANAGED BY "JESOLO TURISMO" S.P.A.:
Services available to the public at various times of the year

Outside the times indicated only access to and staying on the beach is allowed. The company is therefore not responsible for any damage to persons or items that takes place outside the beach concession opening hours, as a result of the suspension of beach services. Beach access is free. The use of facilities, games, and staying on the beach in concession to Jesolo Turismo S.p.A. is reserved for those who purchase beach services. It is forbidden to sit on the stretch of beach between the first row of beach umbrellas and the sea (including the water’s edge), as is any other occupation or use that could block the passageway. "Jesolo Turismo" S.p.A. is not responsible for equipment or private property brought onto the beach or left in cabins, and will not be held responsible for any theft or damage.

SPECIAL DISCOUNTS: price in the afternoon after 2.00 pm reduction of € 4.00 for each row

AFTERNOON PRICE AFTER 14.00
REDUCTION OF 4 EURO